The Amazing Arunachala Mountain At Thiruvannamalai 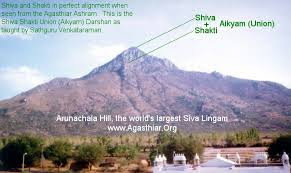 Annamalaiyar Temple is located at the base of Annamalai hills in the town of Thiruvannamalai. The 2668-feet Annamalai mountain is considered an enormous Shiva Lingam. The mere thought of Annamalai mountain bestows salvation to the meditator. That is why many sages worship and circumambulate the mount reverentially. This mountain, with tremendous magnetic power, has existed ever since the earth came into existence. While the Indian subcontinent’s most famous mountain range formation, the Himalayas, is less than 50 million years old, scientific and geological research led by Professor Kent C. Condie, of New Mexico Institute of Mining and Technology, found that the Achaean rock formation of Arunachala belong to the Proterozoic age and is more than 2.5 Billion years old. In the Krita Yuga this was a fire mountain; in the Treta Yuga, a ruby mountain; in the dwapara yuga, a golden mountain; and in the kali yuga, a stone/granite mountain.

Of the five pancha bhootha sthalas, Thiruvannamalai represents the fire element. Annamalai means that which cannot be approached or reached. The mountain got this name from the puranic story of gods Brahma and Vishnu being unable to see the summit or the bottom of this fiery mountain. According to puranas both Brahma and Vishnu fell into dispute, each claiming to be bigger than the other. Both approached Shiva for arbitration.

Lord Shiva appeared as a column of fire and asked them to find the bottom and the top of His effulgence. Brahma assumed the form of annapakshi and rose higher and higher. Several thousands of years pass, but he is unable to reach the crown. Then he sees a screw-pine flower coming down and learns that the flower has fallen from Shiva's head. Brahma conspires with the flower, asking it to testify to the Lord that Brahma actually picked up the flower from His head. Enraged, Lord Shiva curses that Brahma shall never have a temple in his name for his falsity, and that He should not be worshipped with a screw-pine flower.

Vishnu chose to seek the bottom (or "feet") of the Lord. He assumed a Varaha or the wild boar form and bore underground through the patala. After the passage of several thousands of years, he realized his folly, admitted to his ego, and held on to the lord, asking Him to consider it as holding His feet. The lord bent down and picked him up. Thus, because of surrendering to the lord, Vishnu is able to fathom His top and the bottom.

If a finite being desires to realize the Effulgence of Parabrahman, he should meditate on the Supreme Self, who will give him Knowledge so that his ego will vanish.

Lord Shiva's appearing as a tower of fire was also for another reason – to fulfill the desire of Parvathi, a story we enjoyed in the last post on Kancheepuram, and offer Her His left side of the body. Following the advice of Shiva, Parvati came to Tiruvannamalai. Under the guidance of Sage Gautama, she built a hermitage on Pavala Kundru or coral rock and practised austeries. A demon called Mahishasura kept throwing obstacles in Parvati's meditation. Enraged, Parvati assumed the fierce form of Durga and annihilated him. As promised, Shiva bestowed upon Her the wondrous vision of effulgent Arunachala Hill that filled the entire world with its brilliance on a full moon day, in the month of Karthigai, during the pradosha hour.

The Goddess then circumambulated the Hill (Giri-Pradakshina) as advised. Like a bride circumambulating the sacred fire at the time of her marriage, the daughter of the mountain (Himawan) circumambulated Arunachala in the company of Saraswathi, Lakshmi, Indrani, Arundhathi and the wives of sages. She then prayed for union with Shiva

The Lord of Arunagiri acceded to her prayer for the welfare of the world. He also gave Her one-half of His body(Ardhanaareeswara).

What is the goal of Bhakti? The ultimate goal of bhakti is to help the individual soul to merge itself in the Supreme Soul or Paramatman tha...