When Krishna Made Day Into Night 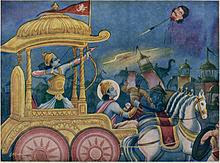 Jayadratha, the king of Sindhu, and the husband of Dhritarashtra's only daughter Dushala, sides with Duryodhana in the Kurukshetra War. Jayadratha once tries to abduct Draupadi while they were serving the 12-year exile in the forest, but is held captive by the Pandavas who leave him alive after shaving his head. Desiring to avenge his humiliation, Jayadratha performs penance and. as a boon, asks Shiva for the power to defeat the Pandavas. Shiva grants Jayadratha the power to hold all the Pandava brothers at bay for one day in battle - all except Arjuna. Jayadratha's father, Vriddhakshatra hearing a incorporeal prophecy that his son's head would be beheaded, obtains a boon that the head of the person who causes his son's head to fall on the ground would get blown up.

On the thirteenth day of the Kurukshetra war, Jayadratha uses his boon to stop the Pandava brothers from entering the impenetrable Chakra Vyuha that Arjuna's son Abhimanyu enters. Trapped inside, Abhimanyu is murdered by unfair means. Arjuna blames Jayadratha for Abhimanyu's death, and vows to kill him the next day, failing which he would enter the fire.

The next day, the Kaurava army under Drona take care not to let arjuna come near Jayadratha. The evening draws to a close and the sun is about to set, but Arjuna is not yet close to Jayadratha. It was then that Krishna raises his Sudarshana Chakra to mask the Sun and create an eclipse. The Kaurava warriors get fooled by the illusion of sunset and rejoice over Arjuna's imminent death. Jayadratha, wishing to mock Arjuna, comes to the forefront in joy, even as the sun emerges from the eclipse. On Krishna's exhortation, Arjuna aims a powerful arrow that decapitates Jayadratha and directs it to Vridhakshatra's lap as he sits meditating near the battlefield. In his shock, Vriddhakshatra gets up abruptly and drops the severed head on the ground, and as a result, his head cracks into several pieces.