Story of Gajendra and Lord Vishnu

King Indradyumna was a great devotee of Lord Vishnu who renounced royal life after entrusting the kingdom to his ministers and retired to the forest where he remained absorbed in the meditation of Lord Vishnu.

One day, Sage Agastya came to see the king but the king did not notice him. The Sage became furious and cursed to turn into a mad elephant.

Realizing what had happened, Indradyumna begged for forgiveness. The Sage mitigated the impact of the curse stating that as ‘Elephant Gajendra’ he would continue to remain devout to Lord Vishnu and one day, by the Lord's grace, he'd be liberated.

Actually, Sage Agastya had noticed that the great King, despite the greatness of his good deeds, still has traces of Ahamkara in him. He felt that the king had to be taught the hard way that self is to be renounced and surrendered to the Lord for attaining moksha. 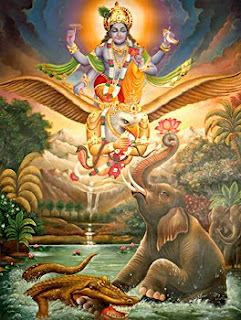 Gajendra ruled over all the other elephants in the herd. On a hot day, he proceeded with his herd to a lake to cool off in its fresh waters. Suddenly a crocodile living in the lake attacked Gajendra and caught him by the leg. Gajendra tried for a long time to escape from the crocodile's clutches. He trumpeted in pain and called to Lord Vishnu to save him, holding a lotus up in the air as an offering.

Hearing his devotee's call and a prayer, Lord Vishnu rushed to the scene. As Gajendra sighted the Lord coming, his Sudharshana Chakra separated the crocodile's head from its body and Gajendra prostrated before the Lord.

The crocodile in its previous birth was a Gandharva king called Huhu. Once Sage Devala came to visit him. The two were taking bath and Sage Devala was offering prayers to Sun God when Huhu playfully fulled the sage's leg. The enraged sage cursed the king to become a crocodile in his next life. The repentant Huhu asked for pardon. The Sage proclaimed that though he cannot reverse the curse, the crocodile would be liberated from the cycle of birth and death only when Lord Vishnu visited the Earth upon invocation by a holy soul.

Symbolically, Gajendra represents the jiva, Huhu the sins, and the muddy water of the lake the Saṃsāra. 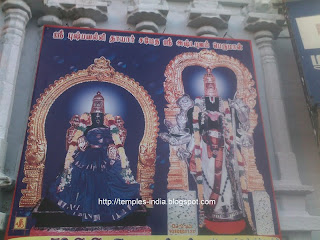 At two of the 108 Divya Desam temples, you can see Gajendra Varadhar. One temple is at Kapisthalam situated just over 10kms from Kumbakonam on the Thiruvayaru road (about 5 kms East of Koodalur Divya Desam), Lord Vishnu is present in Bhujanga Sayana reclining posture facing the East. The holy theertham associated with the temple are Gajendra Pushkarni and Kapila Theertham. The festival commemorating Gajendra Moksham is celebrated during the Tamil month of Panguni.

Another Divya shetram is located in the temple town of Kanchipuram. The moolavar is Aadikesava perumal also called Gajendravaradan (also called Ashtabhujakaram) in a standing posture, with eight hands holding eight weapons, namely conch, bow, mace, discus, sword, shield, arrow and flower, and the Thayar is Alarmelmangai. The Theertham is Gajendra pushkarini.

Thiruppugazhs in which the reference appears