The Story of Paari 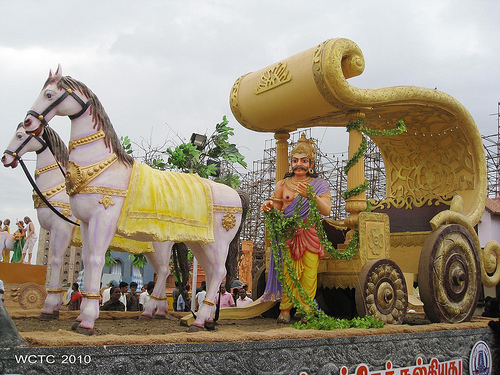 Paari giving his chariot to the creeper

Pari Vallal, the legendary 9CE Tamil Chola king was one of the 7 patron kings ("Vallal") who supported poets and scholars. After the Dwaraka deluge, a group of refugees are believed to have reached Kashmir, while the other group set southwards. King Paari was believed to have reached Tamil Nadu as a refugee from Dwaraka, following the great sage Agasthya. He is said to have ruled the Parambu Nadu.

One day Paari was going around the hill in his chariot. Suddenly a strong wind blew and the king noticed a lone Jasmine creeper which was violently tossed in the wind. He asked his charioteer to move the chariot close to the creeper. He gently bent down and took the creeper wrapping it carefully around the chariot. He set his horses to roam freely and walked to his palace along with his charioteer.

Thiruppugazhs in which the reference appears:

By Smt Janaki Ramanan, Pune To read the meaning of the song muttup pattu ( எழுபிறவி ) in English, click the underlined hyperlink. முன...